The winning team from Torquay Academy competed against hundreds of other students across the country, and 48 teams in the UK Final, to vie for the top prize. 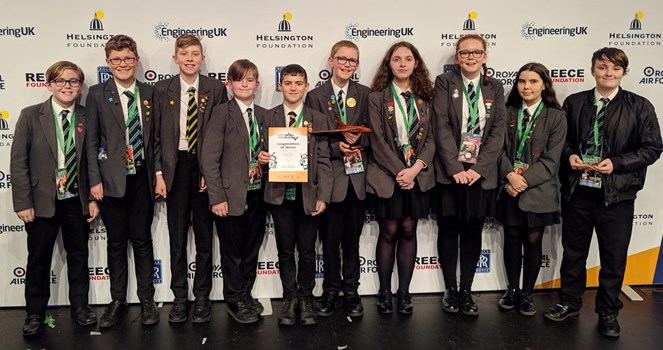 Congratulations to the team from Torquay Academy in Devon, crowned robotics champions at the UK Final!

The winners of Tomorrow’s Engineers EEP Robotics Challenge have been crowned at The Big Bang Fair 2019 at the NEC in Birmingham. The winning team from Torquay Academy competed against hundreds of other students across the country, and 48 teams in the UK Final, to vie for the top prize.

The team is made up of ten students, who are (left-to-right) Oliver Phillips, Robin Pightling, Angus Graham, Ollie Hill, Will Harrison, James Scrimgeor, Azize Isufi, Emily Mahoney-Billis, Antonia Standen, and Kacy Fairhurst. Head of Physics Reece Broome, the teacher who led the group, also received one of the new Teacher prizes, awarded by the Helsington Foundation. This prize includes an in-depth visit to the engineering department at the University of Cambridge and a cash award to the school of £1000.

The students were able to demonstrate the skills they’d learned at The Big Bang Fair, with the winner announced on the penultimate day of The Fair.

The Tomorrow’s Engineers EEP Robotics Challenge is led by EngineeringUK and Helsington Foundation in partnership with the Royal Air Force and with support from Rolls-Royce and the Reece Foundation. Research from EngineeringUK shows that communicating engineering careers to young people is vital for the future of the British economy.